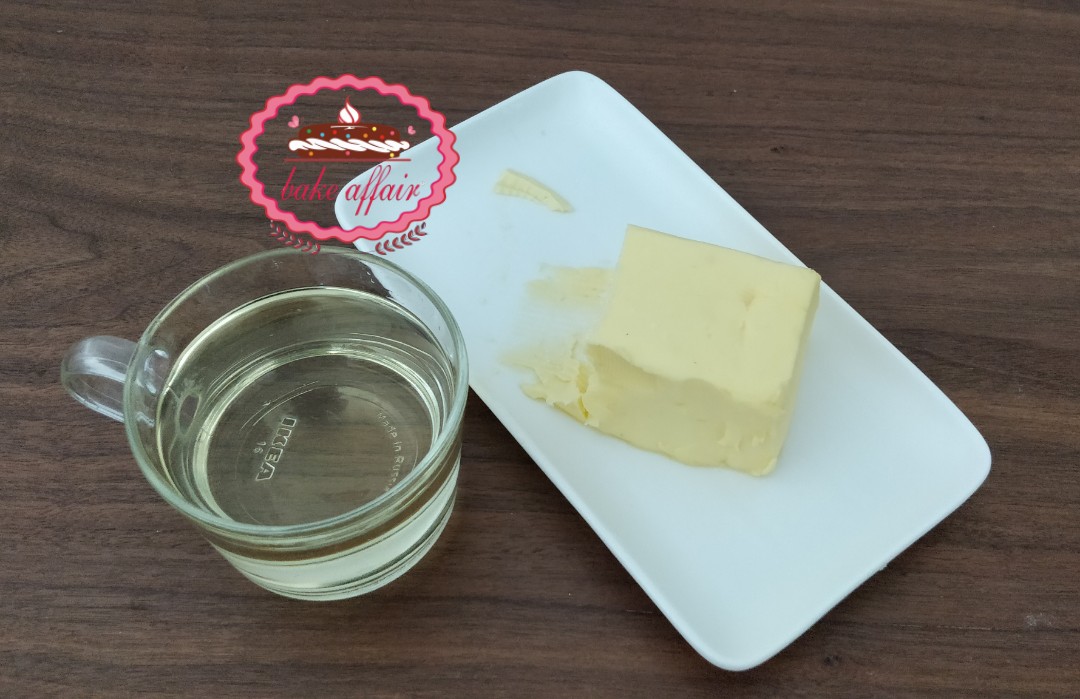 Butter or Oil? This is a question that confuses a lot of us when baking. However, one thing common between the two is fat, which plays a great role in cake making. Its purpose is primarily to provide moisture to the cake.

And there are other important functions of course that include imparting richness, softness or tenderness and of course flavor to a cake. The kind/quantity of fat used in a cake also determines its texture and crumb.

Now that the role of fat in cakes is clear, let us take on our question – Oil vs Butter in Cakes, which is better?

Now its not for me to give my judgement on this question and bias your opinion. What I am here to do is to give you facts and accounts from my own experience of using both in cakes.

The primary difference in using the two is the moistness of the cake. Oil  definitely gives you a more moist cake than butter would. And since oil is 100 percent fat and has no water content or milk solids unlike butter, the cake remains as moist even after you have chilled it.

Another difference is that butter imparts its rich unmistakable flavor to a cake whereas oil may leave an (unpleasant) aftertaste in the mouth if the quantity used is inappropriate or if you have used an oil with a strong flavor.

Having said that, if the oil has been used in the right quantity and is odorless and as flavorless as it gets (for example Canola or Safflower), then this issue does not arise.

A cake baked with butter in it has a finer crumb and texture than an oil cake.

The pictures below are of cakes baked with butter. Note the texture and crumb.

Whereas this one was baked with Oil.

Now it’s your turn to try cakes with both oil and with butter and see for yourself which one you prefer. Or if you have your own experience with the same, leave your comments here. I am eager to hear about it!!

Substituting Oil for Butter in a Cake:

Let’s look at the situation. You need to bake a cake right now and you’re out of butter and you can’t really make a round trip to the grocery store at the moment… I mean what do you do?

Yes. Generally, you could replace butter with oil in most cakes. There is just the right way to do it.

If you must replace butter with oil in your cake recipe, use 3/4 cup of oil for every 1 cup of butter called for. As far as possible, try to use an oil that has a neutral taste and odor. Some oils leave a very unpleasant aftertaste to your cakes ans sometimes even smell.

So the oils recommended as best butter replacement are Canola and Safflower oil. Some people swear by Rice Bran oil too but I have yet to test that one.

So go ahead and don’t let these little things keep you from getting that batter ready and into the oven! Have fun! I love hearing from you about how you found my posts and your own experiences. So go on and leave a comment!